The Jeep Willys is a American and British car in Post Scriptum. The Jeep Willys was one of the most common non-combat vehicles in use by the allies, with over half a million being produced. The vehicle's versatility made it suitable for many roles, such as the towing of supplies or anti-tank guns, and transport even over rough terrain. It can carry a total of 4 people, including a driver and (on some versions) a gunner. The Jeep Willys can be equipped with a Vickers K machine gun, with 100-round magazines. A commander's varient of the Jeep Willys (with a Vickers K) will spawn on all layers with the United Kingdom or United States. This version of the Jeep Willys can only be driven by the commander, although other classes may use the gunner and passenger seats. It can also be spawned from allied vehicle tents. This version can be used by anyone, however it will be unarmed.

Although the Vickers K has a high fire rate, the exposed position of the gunner and driver along with the narrow angle of gun rotation means that the Jeep Willys should not be used to directly engage the enemy on the front lines. The Willys is very fast, capable of over 60km/h. For this reason, it is excellent for use as fast transportation for a smaller number of people. Anti-tank and sapper classes may wish to make use of its speed to outflank the enemy or hunt down enemy vehicles. The platoon commander can use his Jeep Willys to move around the battlefield and as a radio. Unlike the German counterpart the Kubelwagen, the Jeep Willys can be used as a radio even whilst driving. The jeep can also be used to tow the QF 6-pounder or an ammo trailer. 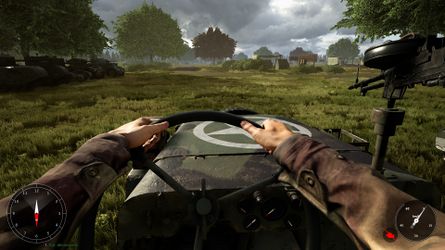